The sun was shining and the bird’s were chirping at the Chicago Spring Half. Chicago doesn’t get hit with Spring very often, but when it does it comes together like Ryan Gosling and Rachel McAdams. For race pictures, contact us.

Tell me about your history with running?
I’ve always been into working out but didn’t start running longer distances till the bar exam after law school. It’s funny, they say all lawyers become alcoholics or marathon runners. [everyone laughs]

Why do you think that is?
Maybe it’s the way attorneys are wired or the lifestyle I have no idea.

What inspired you to start running?
I moved back to Chicago after law school in 2005, I was studying for the bar and needed a release. In 2006, I decided to run my first half marathon—I had a demanding job and was working all the time. I had no control over my schedule and felt like I had no control over my life. Running was one thing I could really commit to and do on my own terms and on my time.

What motivates you to keep running?
As the years go on it’s become a lot more spiritual. It gives me the time to think and reflect without the distractions of being always connected. I’m always trying to be the best version of myself and it’s not necessarily quantified by numbers or time, but feeling like I’m committed to pushing myself and putting myself in a position to grow in some way. It’s just as much mental as it is physical.

Is that level of commitment a byproduct of running?
I don’t think it’s a byproduct, it’s who you are and how you’re wired. People who have that level of commitment in other parts of their life gravitate to something like running. I think anybody can do it [run a half marathon], it’s just not a goal for everyone—if it’s not something you enjoy I don’t think you should do it. But the people who thrive on it and feel the highs and want to commit themselves tend to be wired a certain way.

Do you remember your first thought at the starting line?
I don’t know if it was one thought to be honest [laughs] it was probably a cluster of thoughts. I was pretty excited; I’m always very excited to start a race. I don’t turn my music on until the first or second mile to kind of feel it you know—the energy, the people, I try to take it all in. I’m sure at some point I thought, “it’s crazy that it’s been 10 years since I ran my first one.” I don’t feel 10 years older, although I am [laughs].

In what ways has your approach to running changed in the last 10 years?
When I first started I didn’t have a basis for comparison so my goal was to finish and feel decent [everyone laughs]. I wanted to see if I could do it and what it would feel like because it was all so new. Now, I’m more aware of the experience, whether that’s controlling my breathing, unplugging, or taking a more spiritual approach. It means more to me now than it ever did because it’s no longer a question of whether I can finish, each race has become a reflection of where I am in life at that moment and what a particular year brought.

What was your goal for this race?
My goal was to beat my 2006 time and feel good. I usually never feel horrible after a race but this year in particular, running has been a great release and one of the few healthy habits [laughs] I have—it’s cathartic almost. The race was a good culmination to training.

How did you do?
I was on pace to beat my time but fell apart towards the end. Which is part of the reason why I want to run the one in September [Volition Half Marathon]. I’ll keep the goal in mind but I’m not crazy intense about it. I run with purpose but it’s not the only purpose.

“I love watching people and their families excited and cheering. It really helps in those moments when it’s very quiet—you see somebody holding a funny sign and it gives you an extra step.” 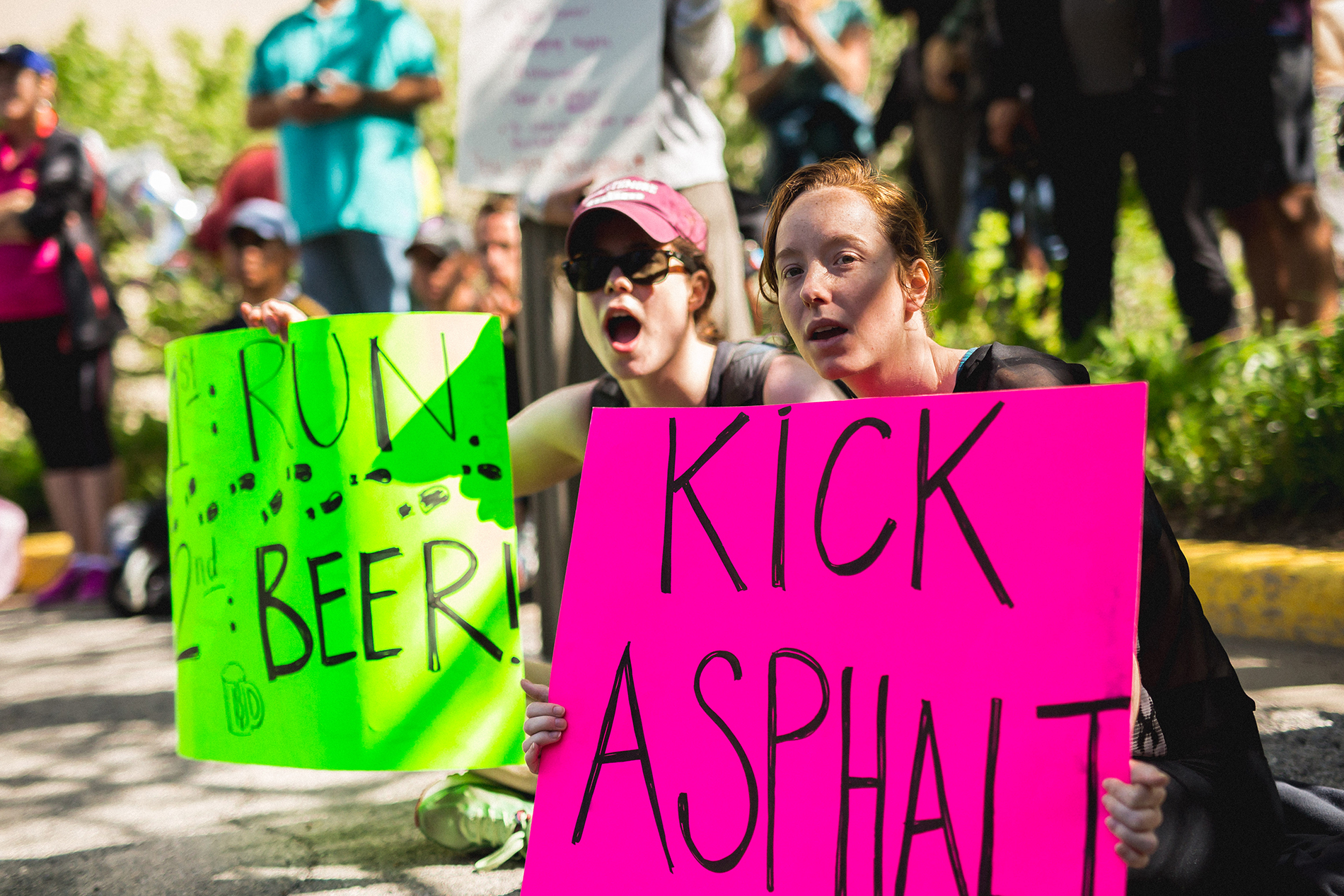 What are ways of pushing through that wall?
I try to be very strategic about which songs I play and focus on breathing. There are a few songs that are my, “Mile 20 Songs.” For the marathon, it was Kanye’s ‘Stronger.’ I don’t even like Kanye but I love that song and always have it on my playlist.

What goes through your head in the last few miles of a race?
I don’t know if I have any coherent thoughts at that point in a race, but I control my breathing and just keep moving—focus on how little is left and try to enjoy it. I ran this race with a friend that I trained with and even if we’re not talking at that point, you still feel the comradery.

What was your first thought when crossing the finish line?
Probably some sense of relief. This one felt long. I had another girlfriend from high school that was coming out so my second thought was probably to find her at the finish. It wasn’t anything super profound.

How important is crowd support?
It definitely gets you excited about running and helps you appreciate not just what it means for you but what it means for other people—it’s a collective experience. Running a race feels really collegial and collaborative to me. Even though I don’t interact with anybody with the exception of a smile now and then, I love watching people and their families excited and cheering. It really helps in those moments when it’s very quiet—you see somebody holding a funny sign and it gives you an extra step.

What’s are your long-term goals with running?
It’s funny, people keep asking me, “how long are you going to keep doing this?” I want to keep doing it until I can’t do it anymore.

Would you call yourself a runner?
I never do. Other people would call me a runner but I’m not fast enough to be a runner [everyone laughs]. I started running in my adult life, it’s not like I ran track in high school so I would never call myself a runner, I would say, “I like to run.”

What advice would you give yourself back in 2006 when you started running?
I would tell myself to respect the training process. When I was a young associate at a law firm, I was working crazy hours, going for runs and putting on heels to go drinking that night. Now, I want to enjoy the experience without feeling like I’m just running to the finish. Maybe that comes with age or maybe I was able to be a lot more abusive to my body when I was 26 and bounce back [laughs]. I almost feel like I needed to go through it because I don’t think I would feel the way I feel today about running had I not experienced it. I don’t think I could have necessarily started where I am today.

What advice might you give someone new to running?
[laughs] I don’t know if I’m in a position to give advice. I don’t really feel like I’m an authority on it at all but maybe just enjoy it and try to be present in the moment. Running can be such a personal experience, my only advice would be to really enjoy it and find what about running really does it for you.

“I’ll keep the goal in mind but I’m not crazy intense about it. I run with purpose but it’s not the only purpose.”

Running gear, you can’t live without?
Dry-fit socks. I use to run with regular cotton socks and I never knew how dry-fit socks can change your life [laughs].

Best costume you’ve seen at a race?
Last year I ran a race in Chicago and saw a guy dressed up as Drake. It was hilarious. He was running in jeans, had the chains, the Drake shirt, and looked like Drake! He had a little Jambox that was blasting Drake, it was awesome.