The Winter Blast was a Sunday morning run along wooded streets and river paths– with plenty of sun, surprisingly warm temperatures, and a little bit of Star Wars. For race pictures, contact us.

What was it like running the Winter Blast?
The race was great—good weather, good crowd, good atmosphere.

What was your first thought at the starting line?
The start was funny, because everyone booked out of there in a full sprint and I remember thinking to myself, “this is NOT how we are going to start this race.” [laughing] I kept up with them for the first mile but knew it was a pace I was not use to keeping. I usually start slow and gradually build up tempo.

How many half marathons have you run?
Three. This [Winter Blast] being my third.

How did you convince yourself to run your first marathon?
It was a challenge I put on myself. When I first started, it was something I did as a bucket list thing. I’ll be honest, it’s not my cup of tea, it’s not something I wish I started when I was younger. Now, it gives me pieces of time alone to think about things. There have been runs I’ve done in training that I thought were great—everything about it, where I ran, the things I saw, the feeling of exhaustion and exhilaration that your body can do more. And I think that’s really what it was, my body can do so much more than I allow it.

How does this race compare to your last two?
It was difficult only because I got hurt mid-way through. I remember seeing mile marker 8 and saying to myself, “Great! This is going well!” And then I felt a twinge in my calf [snap fingers] and once that twinge set in I was like, “Oh no.”

Can you describe the pain?
Sharp! Every time I planted my left foot, it hurt, especially towards the medial aspect of my left calf. It was a chronic, acute pain that kept going because I forced myself to endure it.

“Running is a simpler sport, which makes it more intimate… it gives you a sense of peace, it allows you to get away and escape inside your mind and relieves stress. With soccer, you can’t be somewhere else, you can’t play distracted and expect to do well.”

“Running is a simpler sport, which makes it more intimate… it gives you a sense of peace, it allows you to get away and escape inside your mind and relieves stress. With soccer, you can’t be somewhere else, you can’t play distracted and expect to do well.”

What was going through your head?
I did not want to stop whatsoever, I thought maybe I should stop and stretch it out, but it would have been game over if I stopped. I broke my leg a few years ago to the point where I couldn’t walk, which in comparison, this injury wasn’t severe enough for me to say I had had enough. I set my mind on finishing and pushed through it.

The hardest part was moving past the psychology. Running with an injury, your body isn’t able to perform the way you know it can. Every step was taking away at not only my pace and chance at a personal best, but I could feel it getting worse and worse with each step. In the end, I knew I did more damage to it by pushing through had I just stopped and walked the rest of the way.

Five miles is a lot of distance to cover with an injury, how did you stay motivated?
When I run these distances I always look down, never ahead. When I look ahead I’m reminded of how much more I have to go and see people passing me by. Looking down, I cover much more ground. I know I will reach another mile marker and that’s encouragement—knowing that I’ve cut down the miles. I like to think about it in small spurts. I can run one mile injured, so when I get to the next mile marker I focus on the next mile.

Does the crowd play a key role in keeping you motivated?
When you train you don’t have it, at least I don’t have it [laughing]. Some people do say, “keep it going brother” and that’s cool but most of the time it’s an extra, a supplement to what you already have. The anticipation of the whole race already has you jacked up and when the crowd is there they give you even more of a boost, which is great.

What was the first thought you had when you crossed the finish line?
It felt good to be done with it and know that the purpose of the whole trip was accomplished.

I anticipated your finish being more dramatic for some reason, given your injury.
It’s not that I’m quick to dismiss everything that just happened but it was more, “oh my gosh it’s done, it’s good to be done, I’m with my friends again, I can get a drink of water, or a lot of water, I can eat.” It was more the simple things I was looking forward to now.

I know you’re an avid soccer player, what do you get from running that you don’t get from soccer?
Running is a simpler sport, which makes it more intimate. You have running shoes and a path to run on and that’s it. It’s not as aggressive. Running gives you a sense of peace, it allows you to get away and escape inside your mind and relieves stress. With soccer, you can’t be somewhere else, you can’t play distracted and expect to do well. 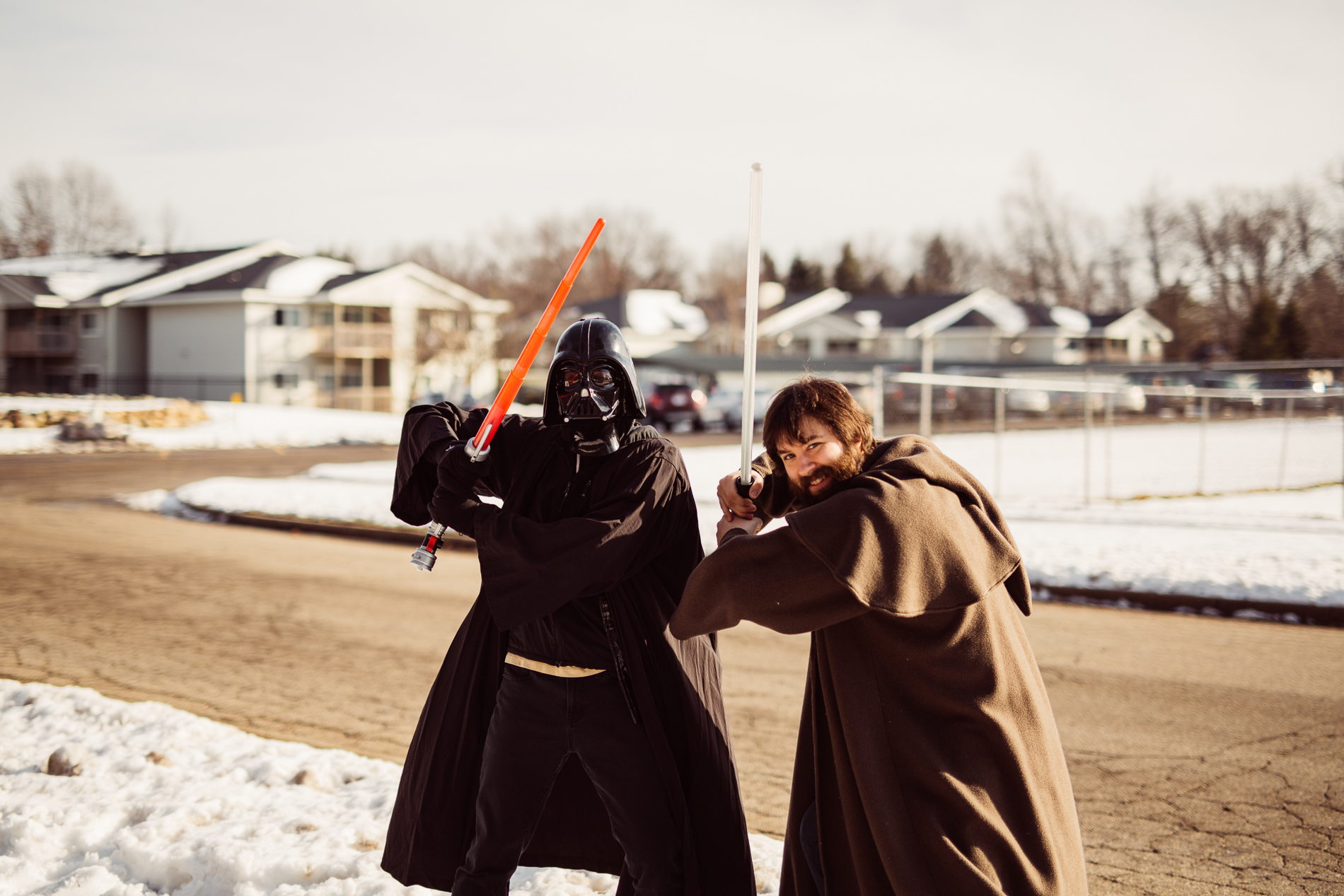 Lightning Round. Goo or gummies?
Gummies. I don’t like the slimy goo and it’s too sweet. You can partition the gummies and take little bits at a time.

Favorite flavor?
None. Any.

Best shoe brand?
Puma. The fit is true to me. It’s a bit wider and they fit my feet better.

What can’t you run without?
Headphones and music.

Best costume you’ve seen at a race?
Obi Won and Darth Vader. Even though this was early in the race, there were supporters dressed in Star Wars costumes and the laughter gave me an extra boost. People cheering you on always gives you encouragement and you may not always know how much it helps especially if you don’t know anyone in particular. But it feels good knowing people are taking time to make you feel like all that hard work has been for something.

Best motivational sign?
“Your mom is calling.” [Laughter] That made me laugh because they were calling out someone’s mom for no reason.

Final thoughts?
I’m glad we did it. It was a good experience and I think I’ll remember it much more because it was a good trip—we drove, we bonded, we ran, we conquered, yes I got hurt but I remember it because I was able to push through it. It motivates me to listen to my body and know I have my limits but know I can transcend some of it.