The Volition America run took us through the beauty of Busse woods– along quiet paths, buzzing trees, and serene lakes. Hello summer, and hello summer storms. For race pictures, contact us.

Tell me about your running history? Have you always been a runner?
No, I wish I would have back in high school but I never did. I started running in 2008, I lost a bunch of weight, about 130 pounds and wanted a new challenge—something I’ve never done before. So I signed up for the Disneyland half marathon.

Did you start out running shorter distances?
No.

You dove right in there!
[laughs] Yeah, I was ambitious during that summer of training and started running 5K’s and 10K’s to prepare for the race. Back then I didn’t know anything about half marathon training so I just ran. I ran about ten 5K races and a few days during the week. But I never even knew what a long run was until much later. I had no idea.

So, how did you do on race day?
It was okay, it wasn’t great—I finished 2 hours and 50 minutes. The first half of the race was okay but the second half was a struggle. It was hot—it’s Florida so of course it’s hot. It was a while before I signed up for another one, gosh, about 5 years after the first race.

What brought you back? How many half marathons have you run since?
I never stopped running, still ran a few 5K races but nothing big. I learned a lot since my first race. Now, I’ve run fifteen [half marathons], and I have six races this summer.

What was it like running Volition?
The course was great! It’s not often you get to run by some elk. It was my first time running Volition, I learned about the organization last year and thought it was a cool idea for a great cause. I’m also an ambassador for the race, so I talk it up, put flyers up at Fleet Feet, and share discount codes on social media to help promote the race.

“When I first walked up [to the starting line], I saw the flags and got goosebumps. You think about the families you’re running for and I felt inspired and touched.”

“When I first walked up [to the starting line], I saw the flags and got goosebumps. You think about the families you’re running for and I felt inspired and touched.”

Always inspired by how many people volunteer and how much work it takes to put on a race.
It’s crazy! It takes a ton of people and you don’t realize what a huge undertaking it is. Being an ambassador, you get to experience a different side of the race and it encouraged me to run harder.

What was going through your head at the starting line?
When I first walked up, I saw the flags and got goosebumps. You think about the families you’re running for and I felt inspired and touched.

What was the most challenging part of the race?
The course because I didn’t know it and there were some hills along the way. But once you’ve done a few marathons, it’s not really challenging.

If not for the challenge, what keeps you coming back?
It’s definitely a challenge, don’t get me wrong. I just like it now. Even if you’re having a tough day, you just keep going. Plus, I don’t want to end up where I was before [overweight].

Do you run with a goal in mind?
I use to want to get to the 2-hour mark, but at some point finishing at a certain time isn’t all that important anymore. You’re never going to win the race, so as long as I give it my best, I’m good with that.

What’s the best advice you’ve received?
Trust your training! Tapering your mileage towards the end of training gives your body time to heal-up before the race. I never believed it but it really does help! Trust it and know you’re going to get there! If you’re struggling during the race, go back to your training log and think about the work you put in and how it got you there. That helps a lot. 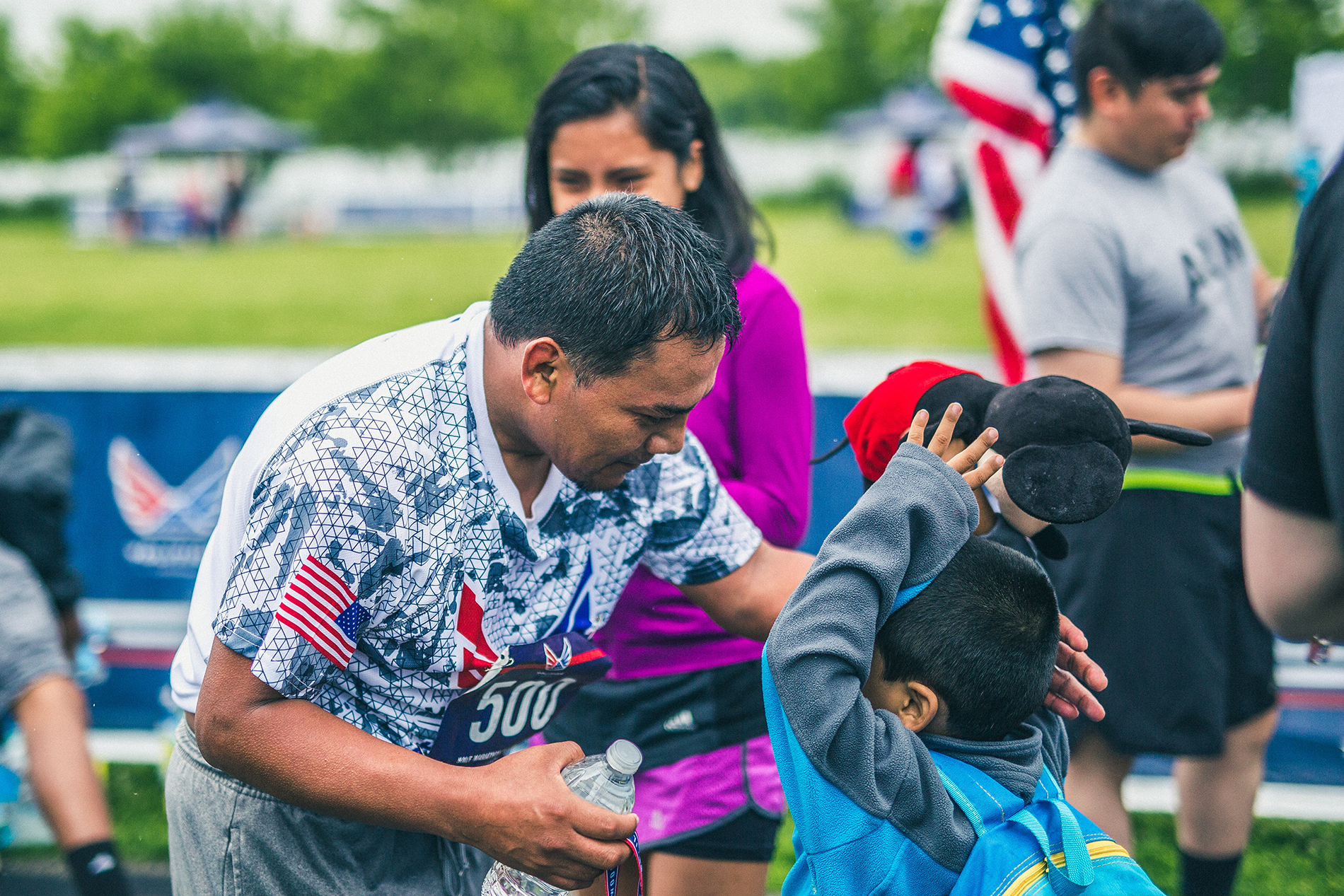 How important is crowd support?
You definitely feel it when you’re starting out and it’s definitely important running a full marathon. You’re going to be out there a while so it feels good to know that people are out there cheering you on when you need it. Fortunately, in a marathon they’re everywhere!

How did you feel at the finish line?
It was cool running through the flags!

Why do you run?
It changes. Weight-wise, I don’t want to go back to how I used to be. Running for a charity last year, and with Volition, definitely changed my outlook. Now, as a pacer I like to see new people who’ve say they can’t do it, go out and do it!

Would you call yourself a runner?
Never in my life did I think I was going to be a runner. But when I look at all the medals, of course I am! A lot of people think that because they’re not fast, they can’t be a runner. It’s easy to point at the elites and say, “Oh, those are runners!” Even though I’m a guy just out here running, I’m still a runner. You just have to keep doing it even though it sucks.

Best costume you’ve seen at a race?
Forest Gump. It was pretty good [laughing]. White suit and a box of chocolates.

Best motivational sign?
It was a guy in a wheel chair missing a leg with a sign that read, “I can’t. You can.”